The Governor of Edo State, Mr. Godwin Obaseki, has said that the state has built formidable structures and systems to receive and re-integrate victims of human trafficking and illegal migration who are indigenes of the state. 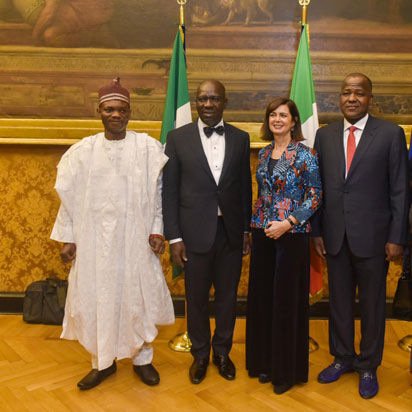 Speaking at the International Conference on Women Empowerment and the Fight Against Trafficking in Persons: Partnership Between Nigeria and Italy, organised by the President of Italian Chamber of Deputies, Ms Laura Boldrini, in Rome, Italy, the governor said the state government needs support to sustain its efforts and ensure that youths do not have reasons to embark on treacherous journeys. Recall that the state government recently received three batches of over 200 returnees from Libya, who were subsequently enrolled in capacity development programmes and placed on a stipend for three months. The state government has set up a task-force to oversee the process of rehabilitating and assimilating returnees and has sent a bill to the Edo State House of Assembly, for the enactment of a law to strengthen the fight against human trafficking in the state. Obaseki said that the state requires huge funds to sustain the rehabilitation of the returnees, noting, “we are spending a lot to reintegrate these young people into the society and we anticipate that the expenses would be more in the nearest future. We solicit for support from the European Union, the Italian government as well as other countries affected by this menace to be able to sustain the structures we have set up in the state.” “All parties affected by the menace of human trafficking both the countries of origin and the destination countries stand to benefit from the system we have set up in Edo State to engage these youths, which would give them no reason to contemplate migrating illegally. So, we want to strengthen these structures in Edo State to make staying back and working gainfully the preferred choice,” he said. On indigenes who are victims of human trafficking and are willing to return to the state, the governor said, “We acknowledge the fact that they are victims, and in many instances, they are entangled in human trafficking due to no fault of theirs. We are extending an open hand to them, and assuring them of support when they return.”

Selling Of Nigerians In Libya: Ministry Of Foreign Affairs