Efforts by the Edo State Government to bring an end to human trafficking and illegal migration in the state has caught the attention of international media organisations, whose representatives are in Benin City, the state capital, for on-the-spot assessment of the government’s initiatives. The list of the international media include, Cable News Network (CNN), premier America news channel, was in Benin City recently to follow the trail of human trafficking, dwelling on the role of local ‘juju’ men in propagating the illicit trade.
About 144 returnees arrived the country on Tuesday, some of whom are heading to Benin City. The increased number of returnees from Libya came after a CNN report sparked global outrage on the sale of Africans into slavery for as low as $400. RTL Television, Germany’s largest private free-to-air broadcaster, by market share, is another news channel that has beamed its spotlight on Edo State, particularly on the governor’s effort at tackling human trafficking. It distributes its content through cable and satellite and digital terrestrial platforms in densely populated areas. The broadcast station, owned by the RTL Group, signified interest in the Libya returnees’ reintegration programme of the Obaseki-led administration, due to the growing popularity of the Edo State home-grown initiatives to tackle illegal migration and human trafficking in Edo State. The empowerment programme has successfully trained 150 returnees from Libya in Agribusiness, who were given 150 hectares of land and N100 million to start a new life as agripreneurs. Also in the state is the prestigious Agence France-Presse (AFP), an international news agency with headquarters in France, known for its objectivity and independence in news presentation and ranked the third largest news agency in the world. The major attraction for these media companies is Obaseki’s resolve to deploy a mix of strategies to curtail the illicit trade in humans, ranging from engagements and an all-out war against the human trafficking cartels in the state, with links in Europe and other parts of the world. The international community’s interest is further driven by the benefits derivable from the Edo State government’s strategy, which will save their governments the troubles of dealing with a problem that has defied solutions across Europe and other parts of the world. 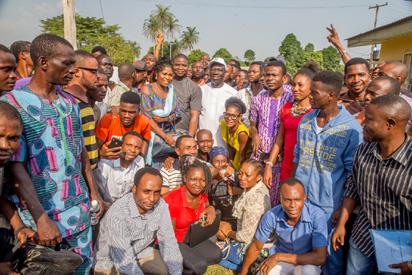 Governor of Edo State, Mr Godwin Obaseki (wearing a white face cap), with a cross-section of Libya returnees after completing their training in agribusiness, as part of the state government’s reintegration programme for 150 returnees, who were given N100m and 150 hectares of land to start their businesses, in Benin City.

At the graduation ceremony of the 150 Libyan returnees in Benin City recently, Governor Obaseki said the returnees would be organised into cooperatives that will be supervised by the Benin-Owena River Basin Development Authority and the Edo Agricultural Development Programme, to become creators of jobs and not job seekers. Reuters, the world’s second largest news agency, also reported the governor’s efforts to stem the tide of human trafficking, particularly his move to enact and enforce laws to prosecute traffickers. There have also been other reports by publications in France and India, chronicling the governor’s intensified efforts to tackle human trafficking in the state.