The Governor of Edo State, Mr. Godwin Obaseki, has described human trafficking as the greatest security challenge facing his administration and has vowed to deploy the state’s powers and resources to break the hold of the human trafficking cartel on Edo youths and end the illicit trade. 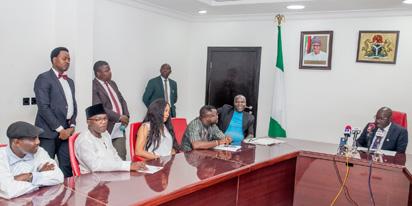 Governor of Edo State, Mr. Godwin Obaseki, speaking during the courtesy visit by delegates of Edo Forum of Patriots at the Government House, Benin City on Tuesday.

Obaseki said this when he received a delegation of the management and members of Edo Forum of Patriots (EFP), led by the chairman, Patriot Aiyamenkhue Edokpolor, who paid a courtesy visit to the governor at the Government House in Benin City.
“Human Trafficking has become a security threat in the state as over 10,000 young men and women were trafficked in a space of 12 months and more than 30 per cent of them lost their lives in the process,” he lamented. The governor told his guests that “human trafficking is one disaster that has befallen us as a people since the European invasion of 1897,” noting that “Even before the invasion, Edo people were never sold into slavery because we had a very powerful army.” According to him: “For us to start selling ourselves into slavery, means something fundamental has happened and much has gone wrong.  We cannot fold our hands, keeping mute as if nothing is happening is even scarier. As a government we took actions and some persons on social media are condemning our actions, I think those people should be arrested for aiding the crime.” Obaseki further said that the tales of the returnees are disheartening as “one cannot but weep for their harrowing experiences, who are deceived and moved from Nigeria by a cartel and syndicate who trade these people like common commodities.” He assured that his administration will not relent in the fight and would mobilise the state’s resources to make sure the scourge is brought under control. Earlier, the chairman of Edo Forum of Patriots, Patriot  Aiyamenkhue Edokpolo, said since the governor mounted the saddle of governance in the state, he has demonstrated extraordinary commitment towards the progress, and well-being of Edo people and the state at large.