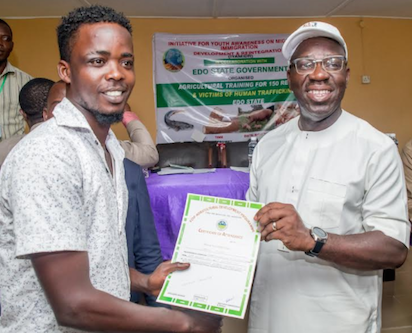 Edo State Governor, Mr Godwin Obaseki (right) presenting a certificate to a Libyan returnee during the graduation ceremony for the 150 Libyan returnees and victims of human trafficking who were trained on agribusiness, in Benin City, on Friday.

Osagie, in a statement, Thursday, said that there are sufficient grounds to believe that actors within the PDP are likely members of the human trafficking cartels that are working against Governor Godwin Obaseki’s resolve to bring an end to the scourge in the state. “We are aware that human trafficking is a major source of revenue to these people who will stop at nothing to fight anyone that stands on their way.”

He added that “at a time world leaders have openly acknowledged the need to fully back the effort of Godwin Obaseki in bringing human trafficking to an end in Edo State, the PDP is chasing shadows and struggling to take people’s attention away from the real issues. “Imagine the PDP which instituted illegal immigration and human trafficking in Edo State through their chieftains’ actions and administrative inaction, blaming the Obaseki’s administration for the afflictions and anguishes that many Edo families are going through now! “It is ridiculous to say the least and I wish to elongate the short memories of the PDP remnants to when they ruled the state. It is on record that human trafficking gained grounds in Edo State when PDP governed the state. While Governors like Senator Bola Tinubu and other clear-headed governors were laying the foundation for a greater Lagos and elsewhere, the PDP government in Edo State was using state funds to celebrate the annual birthday ritual of one of its leaders with millions of naira and at great cost to the poor masses who were promised jobs, good roads, security and good schools, that never came,” he said. He maintained that “Every project the PDP initiated was actually a template for grand looting. Like a leprous finger, anything they touched they ruined: Edo Line, Bendel Breweries, the Fruit Juice factory, Cassava chips factory and others were never meant to work. At best, they were colourful signposts for their criminal enrichment. “Vehicles that were procured for Edo City Transport Service, allegedly found their way to a private university in the state. “Governance, especially revenue collection in the state, was privatised. For anyone to get a job or contract in Edo State then, they were asked to go prostrate to a chieftain of the PDP and greet him Lamokada, a corrupt and a personality-worshipping salutation of the chieftain, not in the bouquet of the several Bini salutations. “Also, we have not forgotten how the flooded portion of Upper Sokponba Road, precisely Dumez Road Junction, was rechristened the Mediterranean Sea, separating ‘Morocco’ (Upper Sokponba Road), from ‘Spain’ (Lower Sokponba Road). “The floods sacked people from their houses in the area and motorists could not drive through to ‘Morocco’ or ‘Spain’ when it rained. The story of Teacher’s House at Ogida was worse, just like every other part of the state.” He noted that “While the state broadcast station was in comatose and the staff went on for months without salaries, a private broadcast station was paid millions of naira monthly. “The centralisation of power in the hands of one family who everyone bowed to get things done was the worst abuse of power in the history of our dear state. “Apart from the seeming direct involvement in the inhuman trade in humans by the PDP, their misgovernance killed the hope in millions of Edo people as nothing worked for them, especially the youths. Because governance was privatised, critical institutions were systematically bastardised and destroyed; thuggery was elevated for vote stealing and our age-old value system tumbled. He further said that allegations are rife that even when they pretended to be fighting human trafficking, in reality, they were neck-deep in the trade, with agents who were ferrying young girls to Italy and elsewhere. He stressed that “the danger with a corrupt government like what Edo people had under PDP in Edo State, is the fact that beyond the broken promises, our prized value system was disrupted. “Blaming the APC’s policies for the result of PDP’s deliberate retrogressive policies of the past, exposes the poor judgement of the clowns masquerading themselves as PDP members in Edo State. “Obaseki’s ‘Wake and See’ government is delivering comfort to the millions of Edo people who were afflicted by the PDP and instilling hope in people as they aspire to fit into socially approved behaviours, trades, professions and vocations. “Never again will Edo people vote the PDP into any elective position to deliver ridiculous contracts like the dredging of Ikpoba River,” he added