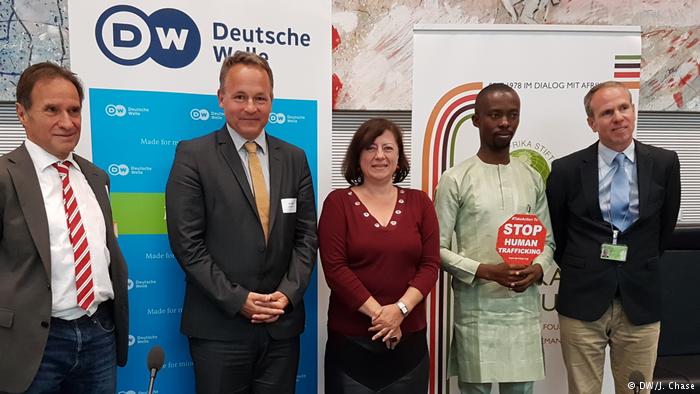 Eradicating the root causes of migration will take some innovative thinking. At an information session in the Bundestag, a panel of experts presented their ideas on Africa to members of parliament.

The event, which was co-sponsored by the German Africa Foundation and Deutsche Welle, saw three experts briefing representatives of almost all of Germany’s major political parties about illegal African migration. It’s a difficult topic to get a handle on – especially as Germany doesn’t even know how many African migrants there are in the country.

Estimates made by Organization for Economic Cooperation and Development, the United Nations Human Rights Council and Germany’s own Office for Migration and Refugees (BAMF) differ wildly because they count different categories of people.

“The essence of the tangle of numbers is that we don’t have any good overview,” said Reiner Klingholz, director of the independent think tank Berlin Institute for Population and Development.

Klingholz said that roughly 50,000 African migrants may arrive in Germany per year, of whom one-half to two-thirds leave the country sooner or later. That hardly represents the “flood” of low-skilled immigrants right-wing populists fret about at every given opportunity. But the numbers are on the rise, which is worrying given the prospect of a population explosion in Africa and the fact that Africans can only reach Europe by submitting to exploitation by human traffickers.

“Human trafficking and illegal migration are increasing in Nigeria, with the majority of victims being young people,” Chidiebere told the Bundestag deputies. “The traffickers come in different forms, but most times they come with fake promises of a better life in Europe.” 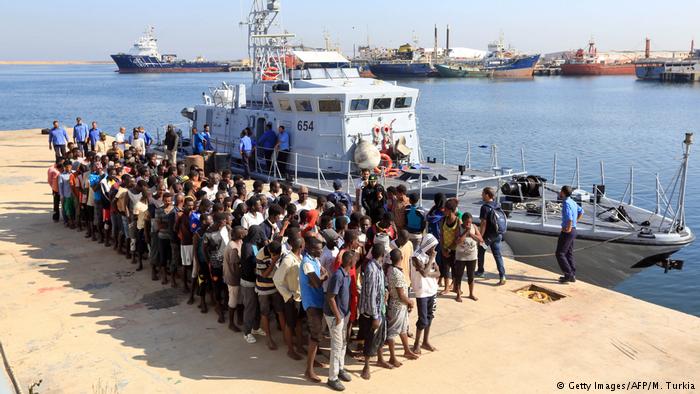 Many African migrants have to be rescued in the Mediterranean, but some aren’t so lucky

A common stereotype within anti-immigration movements like PEGIDA and the far-populist Alternative for Germany (AfD) party is that migrants are far better off in Germany than poorer Germans are. The reality for most migrants is much grimmer than that.

Claus Stäcker, the head of Deutsche Welle’s Africa program, spoke of the “mistaken ideas” and “unrealistic expectations” of many migrants concerning Europe.

Stäcker told of young Nigerian women being lured by human traffickers into making the dangerous crossing across the Mediterranean to Italy only to be forced into prostitution at the lowest, most perverse rungs of the sex industry. He also offered a self-critical assessment of Germany’s involuntary role in encouraging Africans to make the wrong decisions.

“With its open policy toward migrants, Germany may have contributed to this,” Stäcker says. “One of the echoes of the crucial summer [for mass migration] of 2015 is that anything’s possible in Germany. Germany has an excellent reputation, but people have some truly illusory ideas about what they could achieve in Germany, if they work hard enough.”

“Many of them think that European governments are more caring,” agrees Chidiebere.

Stäcker says Western state broadcasters like Deutsche Welle need to be frank in depicting the downsides to migrating to Europe as well as the positive aspects of life on the continent. And Western governments, everyone agrees, need to start combatting the root causes of illegal migration. 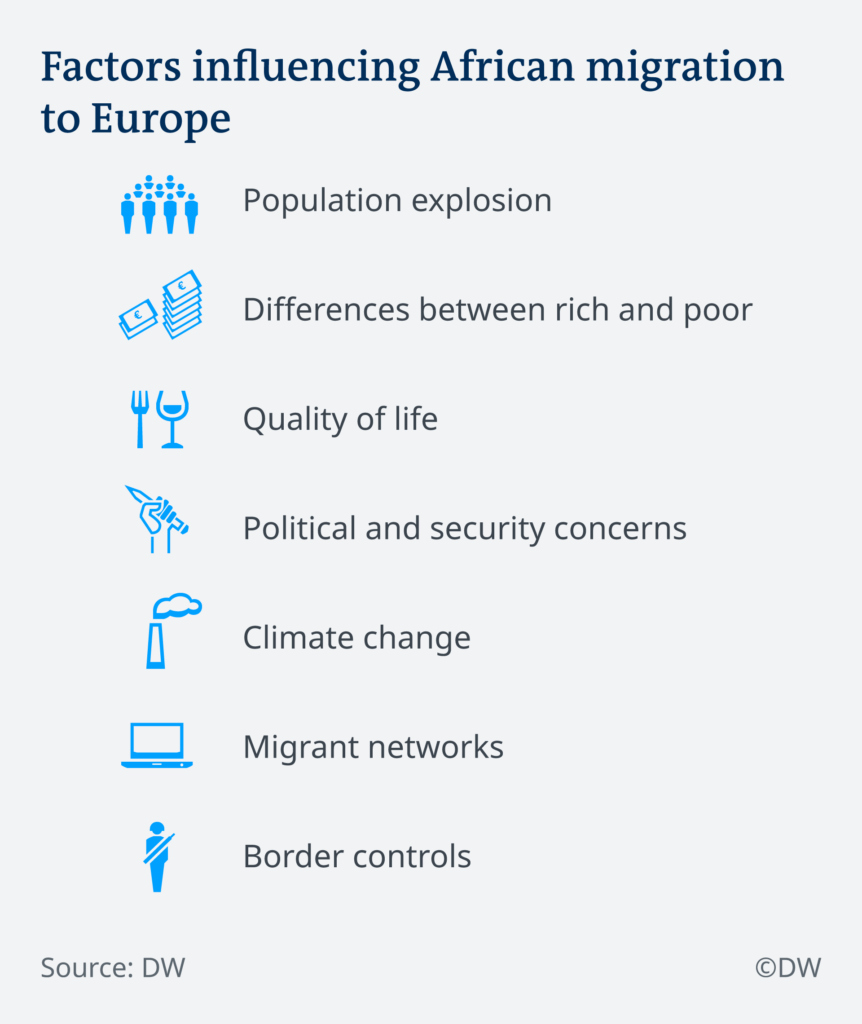 The problem with population

So why do Africans choose the risky path of illegal migration to Europe? After all, as Klingholz puts it, “no one from Ethiopia feels an inner need to go to Bielefeld.”

For Chidiebere, the main motivation for Africans to migrate is not the desire for material comfort per se but rather the “lack of social protection” in Africa.

Klingholz cites seven main factors that influence African migration, of which the most important is uncontrolled population growth. Experts predict that Africa, the world’s poorest continent economically, will account for more than half of the world’s population growth by 2050. If not curbed, that could mean unprecedented economic misery in Africa and migrant numbers to Europe that would dwarf those of 2015.

“It’s simple – more people means more people who who will hit upon the idea of moving to another country,” Klingholz said. 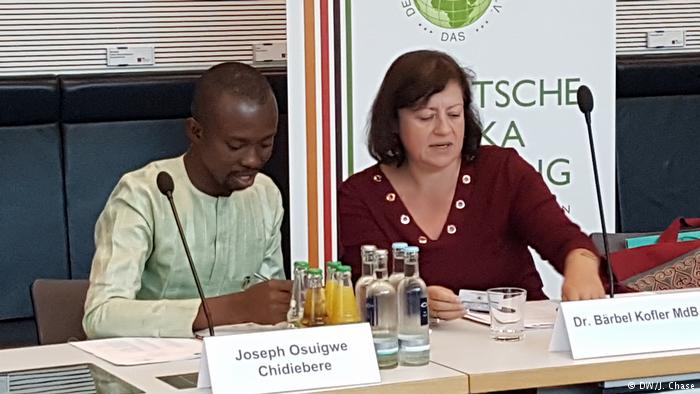 Klingholz said that thus far measures aimed at combatting the root causes of migration have yet to keep “a single person” from setting off for Europe.

Stäcker raised doubts as to whether broad-based financial assistance (the so-called watering-can principle) or Germany’s much ballyhooed “Marshall Plan for Africa” would significantly alleviate the situation. He also acknowledged that Western nations often had to make deals with autocratic African leaders to help people in need.

Klingholz explained that many of Africa’s problems can only be solved in the long term, whereas Germany’s political system tends to function in increments of four-year legislative terms.

But the panelists also sounded some notes of optimism. Klingholz pointed out that not all that long ago many Asian countries were as poor as today’s African ones and had succeeded nonetheless in achieving impressive economic growth and in improving living conditions. And he cited Ethiopia as an example of a contemporary African nation on the rise. The keys, he said, were jobs and education, including sexual education.

“Education has the double effect of giving people perspectives for the future and reducing the number of children,” Klingholz told the Bundestag deputies. “Population explosion needs to be made into a public issue not just politically, but on all levels of society.”

And Chidiebere pointed out that there have been examples of Africa dealing with serious problems in the recent past, drawing a comparison with the fight against the Ebola virus from 2014 to 2016.

“When Ebola came to Nigeria, it was seen as a national priority, and everyone was committed, even the government,” the young activist said. “And after one year, Ebola was eradicated.”

Human trafficking, Chidiebere says, could also be done away with, if there was a similar demonstration of political and public will.

This piece was first published by German Deutsche Welle.